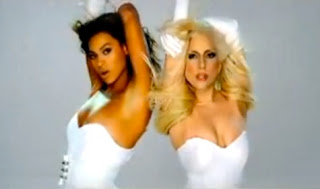 (Originally written in 2009 )   The camraderie and chemistry between the taboo-taunting Lady Gaga and the formerly pristine Beyonce, who once pitched herself as just a sweet, wholesome Jesus-loving Southern girl, comes as no surprise since they share Scorpio Lunar energy.

But make no mistake about it, the repeat alliance between the two has revised Beyonce’s brand and image forever. 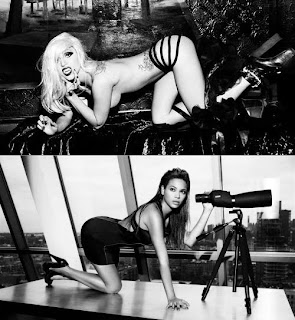 Even before Lady Gaga reached pop stardom, Beyonce, whose Moon is at 4 degrees Scorpio, seemed to be aware of the budding artist and gravitated toward her in spirit. Beyonce came out with a custom metal gloves, blind-folds, and robotic attire, mimicking some of the risque costumes that the up-and-coming Gaga was wearing across the Atlantic. These props stood out because did not match Beyonce’s songs and seemed out of place. Many people accused Beyonce of simply lifting the schtick from Gaga for attention– as well known artists often do to novices on the upward climb.

Beyonce had been known for bubble gum dance grooves, but suddenly she wanted to embrace shock culture and shock costumes. The copying did not deter Lady Gaga’s rise or steal her thunder, however. Gaga’s Moon was stoked by a six-degree conjunction to its ruling planet Pluto, allowing Gaga to dream of new perversions of death and the macabre that Beyonce could never rival or successfully mimick.

The Queen Bee, whose forays into Plutoland always seemed awkward and inauthentic, was obviously impressed and asked Gaga to corroborate with her in the video for “Video Phone” in 2009. On the surface, the obvious question seemed “Could there be an odder couple?” Their styles are diametrically opposed. Can you imagine Gaga singing “Bootylicious?”

But moon-moon magnetism works surreptiously below eye-level as it deals with our unconscious compulsions, particularly so when the synastry is in the Scorpio brand.

Luckily Lady Gaga accepted the invitation and the world saw they had palpable chemistry as Gaga remade herself in Beyonce’s image.

Gaga followed up the favor in 2010 with the limit-pushing ode to pulp culture — “Telephone.” 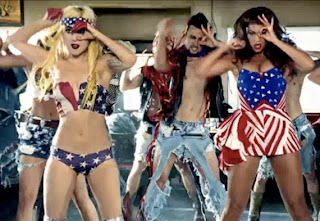 And yet Beyonce seems in her element. Her Pluto is just 2-degrees away from her Venus in Libra. She might feel finally that she’s found her brand of art. The conflict is that it pits her against the pristine virginal Virgo image she spent her time trying to create, somewhat unconvincingly, in the early days.

In the past, when Beyonce wanted to go risque, she blamed it on her alter ego Sasha Fierce. However, in true Scorpio Moon and Ascendant form in February 2010, Beyonce told an interviewer for Allure Magazine “Sasha Fierce is done. I killed her…. I don’t need Sasha Fierce anymore, because I’ve grown and now I’m able to merge the two.”

Of course she doesn’t need her — Beyonce now has her real-life flesh-and-blood Sasha Fierce in her lunar sister Lady Gaga, totally rocking her identity house, her ascendant, and allowing the subconscious parts of her to finally live.

Months after killing Sasha, Miss Beyonce sported a profane T-shirt at a Coachella event bearing the word mother-f—-r among other expletives. Perhaps this shows she’s reconciling that the provocative Pluto in her and that she doesn’t have to be Miss Sweet Girl Next Door.