Categories Menu
Home » General Astrology » The Rock Does Disney … Again . What Some People Won’t Do to Make Up for a Lack of Water Planets

The Rock Does Disney … Again . What Some People Won’t Do to Make Up for a Lack of Water Planets 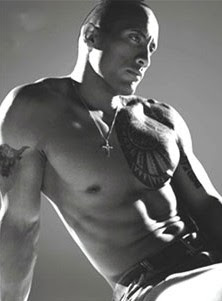 (Originally written in 2009) What is a macho specimen like Dwayne “The Rock” Johnson doing in another Disney movie?
Is this the warrior from “The Scorpion King”? Is this the man who kicked butt in “Walking Tall”? Did he or did he not pass Arnold Schwarzeneggar in a scene in “The Rundown” as a symbolic passing of the action hero torch?

So why is he not in any action movies? Why did he do the cute as pie “The Game Plan” and now he’s coming to theaters in “Race to Witch Mountain”!

Let me repeat, “Race to Witch Mountain”!
And do you know what’s next? “The Tooth Fairy!!!”

A gorgeous, chiseled and sensual Taurus by Sun sign, The Rock has no water planets and like many who lack an element seems to be overcompensating by working overtime in the realm of the missing element. Water is emotion.

Cue the waterworks of sappy, family-style Disney Movies. What a waste of bravado and sexiness. I mean, I’ll watch him in anything (does he not have killer charisma?!) but c’mon … Disney? The Rock? You’ve got to be kidding me.

He’s got the mind and fiery tongue of a commander (Mercury in Aries). He’s got the hutzpa of a Mars square Pluto (two power signs, which will joined in a square emit strong aggression). Pluto also square his passionate Moon, giving a brash, tough edge to intense, private emotions.

But clearly these are flexible qualities and it’s short-sighted to pigeon hole this man.

He’s proven his Pluto, that is he’s proven himself as a man of reinvention. Pluto is extremely strong in his personal life — aspecting 3 personal planets plus Jupiter. Not only does it square his behavior planet of Mars, but it squares his Venus, which highlights his talents and his artistic side. (As stated previously, it squares his Moon as well).

Having Pluto in hard aspect to Venus (skills, talents) can force one to constantly transform and dig for a secret, hidden talent or art. Transform is a nice way of putting it. Pluto will destroy something you love doing and force you to replace it with something else. But, as is Pluto’s way, it will redeem you and make you better for it. A past VH-1 bio on The Rock famously revealed him as one of the country’s top high school football talents. He earned a scholarship to college and expected to go pro but endured a injury that changed the trajectory of his life. He lost his scholarship, was penniless and sleeping on a dirty mattress taken from the garbage.

But the Pluto square his Venus allowed him to dig up another talent and morph into a wrestler. That led him to fame and then his Pluto ended that career while simultaneously unearthing The Rock’s acting talents. He started as a buff action hero but now Pluto has him changing again into something a bit softer. I admire that he doesn’t stay in a mold (Pluto square his behavior planet of Mars won’t allow it anyway. Plus with Pluto square Jupiter, the planet involving our philsophical approach to life, the Rock is pushed to follow his own principles even if (or in the case of this square especially if — they defy expectations).

What’s in his future I can’t guess. But I’m sure this man his more changes than muscles up his sleeve.

Hopefully he’ll get over his emotional Disney fetish so I can see his body racing across the screen, pummeling flesh and churning in a bed.