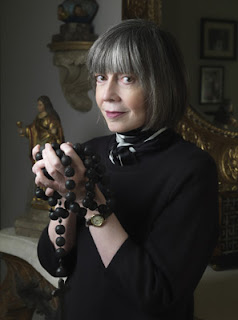 We can thank Anne Rice’s Pluto for making vampires more sexy, than scary. Before that, did anyone really want to screw Dracula?

As the modern day Twilight vampire series digs its fangs into pop culture I can’t help but to reminisce about Rice, who’s now defected and gone to the hyperreligious side — a typical hazard of an active Pluto (the need to capsize everything for something new. Pluto conjunct Ascendant native Madonna and Scorpio Ascendant Prince have also left darker Plutonic personas for religious ones. It happens).

Rice may not have Scorpio rising (her birth time isn’t listed on Astrotheme). However, the always dressed in black Rice, born Oct. 14, 1941, does have a Scorpio Venus and Mercury — the two planets which drove her fictional writing. Plus, Pluto, Scorpio’s ruler, aspects all but one of her personal planets. It is sextile her Sun, trine her Moon, square her Mercury and opposite her Mars, It also strikes her Jupiter in a semi-square. Rice was touched in every way, in very personal ways by the spell of Pluto. It misses Venus, but with Venus already in Scorpio, that’s not a lack.

I credit Venus in Scorpio for shaping Rice’s artistic ideas about the basic nature of vampires, for deciding to make them deeply troubled emotional creatures who had conscience and theories about death and eternal life. I credit Venus, the planet of love and beauty, for finding something seductive and regal about death by someone’s fangs sensually sinking into flesh and pilfering blood. Those Scorpios — always finding grandiose uses of other people’s property (and energy).

Rice’s Scorpio Mercury mind couldn’t make death and killing simply evil. Scorpio energy is more complex than that. She made death transformative and haunting. She penned the episodes of blood sucking in a way that mimicked thrusting during sex… a reader could feel the blood moving through the veins!

Having her Scorpio Mercury square Pluto, the planet of the paranormal, Rice fused with her creations in a way that was eerie. I remember once on Oprah she talked about writing and having the sense that the vampire LeStat had walked into the room with her. She’s got Neptune, the planet of psychic energy, conjunct her Libra Sun, so her nature was certainly piqued to experience supernatural phenomena whether real or of her own imagination.

Anne Rice’s dripped her Pluto all over vampire lore and it will never be the same again.

Before Rice, vampires had no real erotic power, introspection, intimacy, or lives with meaning. Bram Stoker’s Dracula is the quintessential vampire and did have some twisted hints of sexuality. The book  certainly was considered titillating for its time. However, Stoker correlated vampire sensuality with disease rather than power; the sexualitywas a very negative revolting kind. Rice does owe some credit to her contemporary Marilyn Ross whose vampire TV series sought to humanize vampires with sentiment and make them more likeable at virtually the same time Rice was creating “Louis” and “Lestat” for the first novel. However, in my estimation, Rice, by far enriched and founded the romantic vampiric era which lives on today in works by Laura K. Hamilton and Stephanie Meyer’s Twilight stories which hit theatres again this fall as the sun sets in Scorpio.

When I was young Scorpio child my Aquarius brother who has a 1 degree Moon-Pluto conjunction gave me the gift of the Vampire Chronicles by Anne Rice. He extended the first installment “Interview with a Vampire” to me saying “When you read this. You will want to become a Vampire.” And he was right!