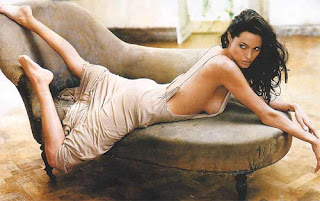 First, A moment of due worship.

OK. Let me pull myself together. Is this not the most amazingly vibrant presence on Earth?
She’s my idol.

And yes, I’m still upset that with her intensity, sexuality, brooding manner, and dark fetishes for bondage, cutting, blood and death that she is not a Scorpio!

Universe! What were you thinking!

Never fear, the Divine Cosmos saw fit to anoint Angelina with strong Plutonian energy that intensifies her Sun, Moon and Mars.. Her Sun trines Pluto while her Moon and Mars oppose it, allowing her enough harmony and tension with Pluto to come close to radiating herself as a Scorpio ideal. She has no 8th house placements.

The Plutonian Jolie wielded a pretty powerful sting when she starred in Mr. & Mrs. Smith and captivated Brad Pitt.

Another moment of worship, please. 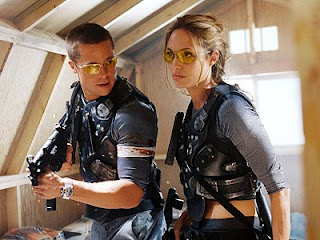 Brad Pitt is not the kind of man you’d expect to leave his wife. HE HAS FOUR FRICKIN’ **PERSONAL** PLANETS in CAPRICORN, for goodness sake.

His Moon (emotions), his Venus (love tendencies), his Mars (behavior/sexuality) and his Mercury (communication/thinking tendencies) are in the Earthy Capricorn sign.

That’s amazing. Caps are rooted. They’re devoted as a simple matter of duty and responsibility. And he has a frickin’ four-planet STELLIUM anchored in the goat. That’s makes his leaving rather remarkable.

But sure Angelina’s a bad-ass for jostling such a rooted entity lose, but in all honesty with Brad’s Sagittarius Sun, he’s lived a life of tension between his Capricorn energy of structure, tradition, and duty versus his Sag ego that wants to roam, have new experiences, be ADVENTUROUS be free.

The Capricorn seemed to be winning, until in walked a lady whose True Node was in Sagittarius conjuncting Brad’s Sun. The true lunar node is where you are moving to in life. Her destiny is toward Sagitarius energy and she reminded Brad’s Ego who he really was.

Here’s what CafeAstrology says about when a true node conjuncts a Sun: This contact is a powerful one. Instant friendship is probable … This relationship is attractive and carries with it some unspoken promise of growth. There is a feeling of “going somewhere” through this relationship. You are likely to be quite active together, spurring each other on frequently.”

Going somewhere?! Hell yeah! By motorbike and by plane. Angelina not only got him back into motorcycle

s again (after Jen was too concerned about his s

afety — by the way, Jen is WAYY clingy for an Aquarius) — but she bought him a $10,000 one for his birthday. And Jolie, herself a pilot, had that boy signed up for airplane flying lessons. Angelina and Brad merged their Sag lusts and suddenly their new lives took on the Sag signature of adventure!

But the final glue sealing Angelina and Brad together is Brad’s 7th house, the house of romance and marriages. His Descendant (which represents what he lacks and needs in life) is in Gemini exactly conjunct Angelina’s Sun. And of course Gemini is the sign ruling Brad’s 7th house. But that’s not all. The sign of Cancer is on Brad’s 7th house as well. It is almost even split with Gemini in ruling Brad’s romantic house– and guess what… Angie’s ascendant (outer method of expression) is in feminine Cancer along with her Cancer Venus! And add to all this zodiac Cancer rapture the fact that Brad’s true north node is there … and there’s a lot of magnetic zodiacal glue between these two.

Jennifer Aniston on the other hand had no 7th house matches with Brad Pitt. She had Mars (behavior, sexuality) in Scorpio, which …dare I say, could figure in to her tendencies to be rather clingy, or um, obsessive in love matches. Add to that that poor Jen has a Sag Moon to pine over Brad’s Sag Sun, and those sun-moon matches also can produce emotional dependency. When love works, that sun-moon conjunct is great, when it falters … it is agony.

Even worse for Jen and Brad, his stern Saturn is in Aquarius trying to tether Sun. That’s interesting. We tend to see her as harnessing him, but something about his manner could have been restricting her a bit, too, according to the chart.