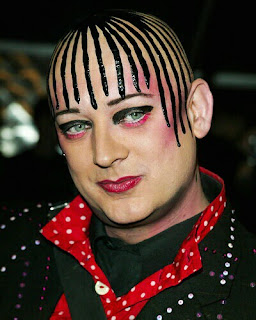 Ahh, to have Leo on the fifth house.
Pleasure and passion seemlessly pulsalting.
Must be nice …. unless you have residing there a Mars & Uranus bearhugging in a tight conjunction.
Then, the situation gets a little dicey & too footloose.
As is the case with Boy George who years ago was sentenced to 15 months in jail for chaining a hired sex boy toy to his bedroom wall.
Hey, that’s just a normal activity for a person with Mars-Uranus conjunction in the 5th.
Boy George was so unfazed by his conviction that he launched a string of concerts.
When the courts have slapped him with actual jail time, he had no choice but to put the conjunction on lockdown.
That’s hard to do without court help. And a little help from Saturn, which he subsequently got, thanks to a transit.
A Mar-Uranus conjunction in the fifth house can honor the lust for indulgence in really reckless ways.
Mars guides

behaviors and Uranus is master of the strange and the outlaw (since Uranus defies rules and is unpredictable.) When they mesh with the pleasure house, look for recreation that is spontaneous, erratic and eccentric — way, way on the wild side.

This singer has his Mars at 22 degrees Leo, with Uranus just one degree away at 23 degrees. They are his only fire planets.

With the conjunction in the sign of Leo — the star who needs a stage — these indulgences can consciously or unconsciously get brazen public exposure, such as when in 2006 set up himself up for arrest and a drug possession charge by calling 911 himself for a burglary, and then sitting in the apartment to wait for cops while doing lines of cocaine. And, well, now we have this.

But the conjunction is also why Boy George, formerly of Culture Club, could be so brazenly and unapologetically avant garde in lyric, emotion, themes, and persona during the 80s when his band churned out its pop classics like “Time,” “Church of the Poison Mind,” “Miss Me Blind,” and “Karma Chameleon.”

He wrote his own lyrics. And I can remember reading the album sleeves as a child and being consumed with the strange world of thought he was drawing me into. I mean, no one meshes motifs and metaphors quite like Boy George, and we have the Mars-Uranus artistry to thank for that.

The conjunction makes just one other aspect: a sextile to his Sun. To harmonize with his ego, is a is a very definitive move for this energy. It’s basically an inseparable part of his selfhood. He cannot denounce it and maybe can’t do much to reign it in, as it’s so coordinated with how he sees his identity. It’s not that he pretending to be a strange brew for show business, like so many other acts in the eighties with their schticks and costumers, he just is.

When Saturn  transited square that Gemini ego, the Universe created a buckling down of sorts for George. And a year in jail fits that.

I admire the strange flourishes and behaviors that a Mars-Uranus conjunction can breed. That’s why someone as handsome as Johnny Depp could not just go pretty boy Hollywood, but instead chose ecletic Hollyweird. Depp’s conjunction is in a more stabilizing earth sign of Virgo and is toned down by a Saturn opposition. Plus it’s in a more private second house.

For Boy, formerly George O’Dowd, his ribald antics are more extroverted and showy, but still authentic and consuming. But then what is authentic to someone with Venus opposite Neptune? Their perception of reality, even their own personal one, is always shifting. This opposition enshrounds his imaginative and weird personality in a heightened artistic sense. And with Venus on the Ascendant, we’ll always get a front row seat.